The Rotary Playground in Hernando’s Landing at Lake Parker is now open and it is AMAZING!

While we could try and describe it to you, we wouldn’t do it justice, so we’ll just let our photos and videos do the talking! 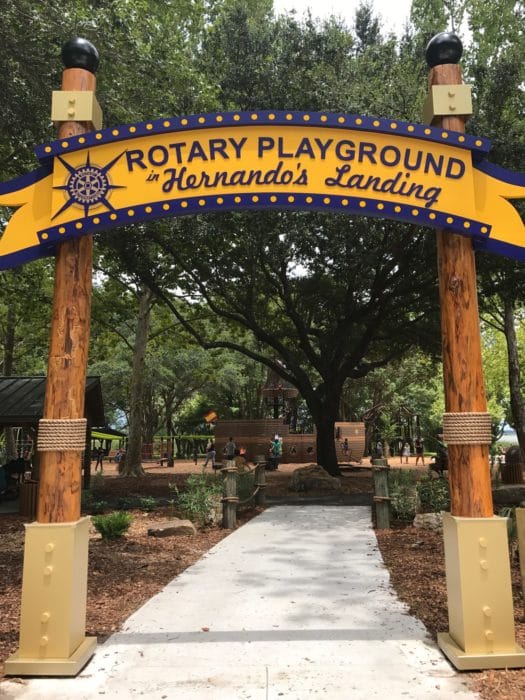 The entrance from the parking lot 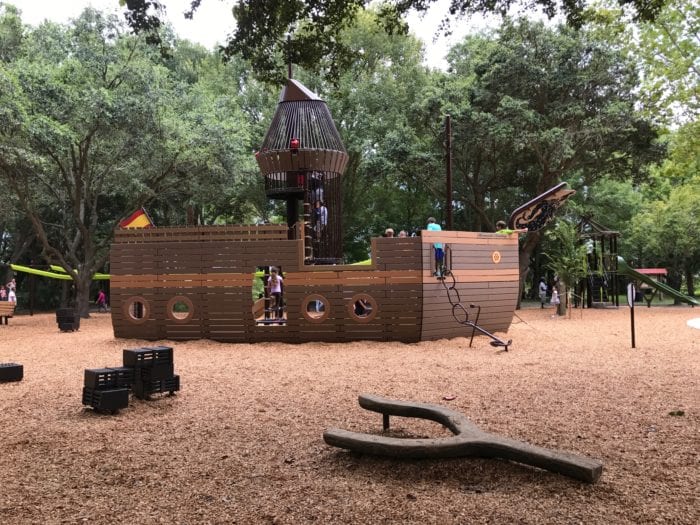 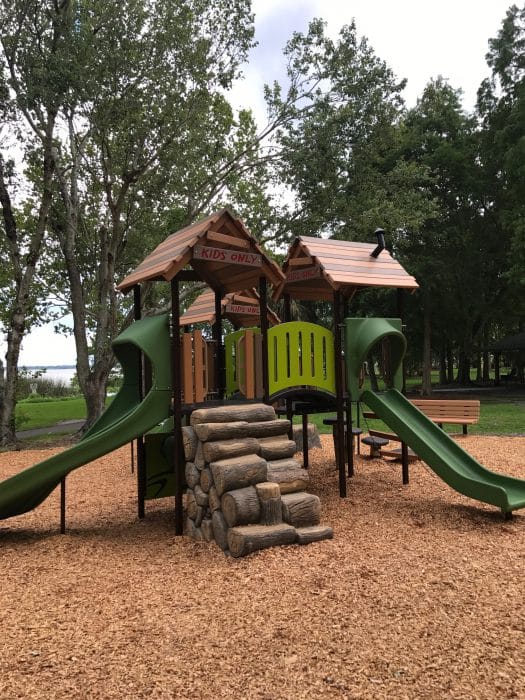 One of three play structures with slides and climbing areas 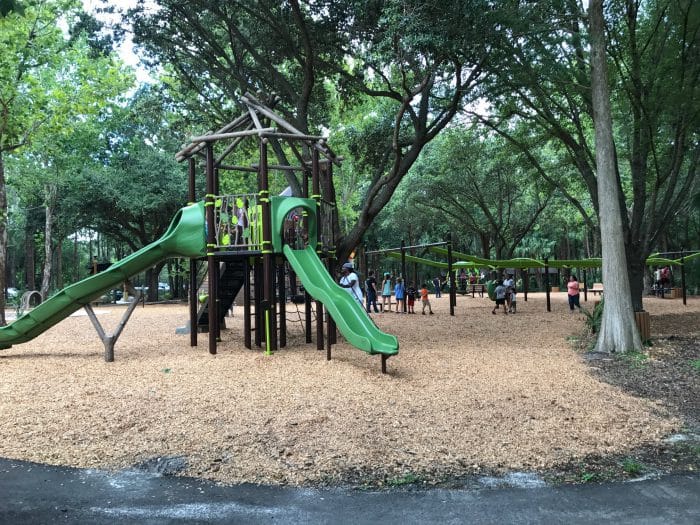 A treehouse where kids imaginations can run wild! 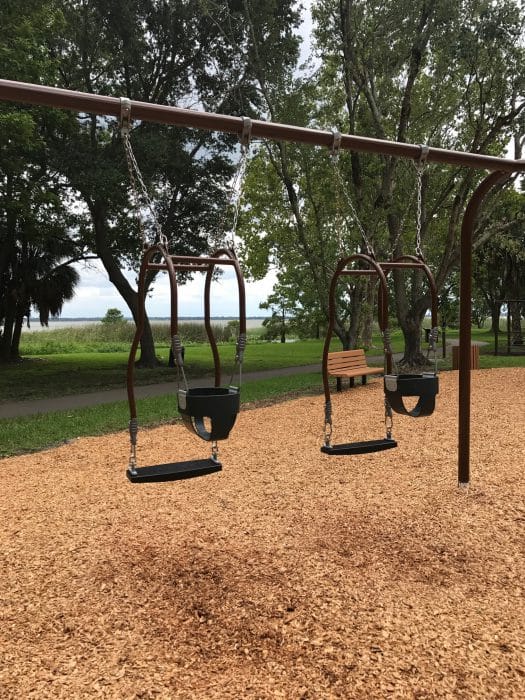 A swing for both mom/dad and baby 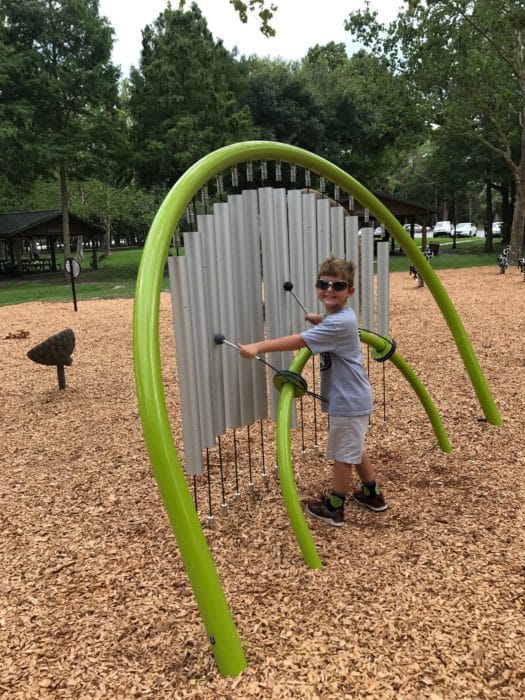 The musical area has chimes and drums

How to get to the Rotary Playground in Hernando’s Landing at Lake Parker:
910 E. Granada Street, Lakeland, FL 33805

Lake Parker Park is off Lakeland Hills Blvd just north of Lakeland Regional Medical Center and Joker Marchant Stadium. The Park has multiple entrances – be sure you know where you’re going before you head for the playground. If you use the location provided by Google Maps, YOU MAY END UP IN THE WRONG PLACE!!

The playground is located at the park entrance off Grenada Street/W Lake Parker Drive. Use 910 E. Granada Street, Lakeland, FL 33805 to get you to the correct entrance. Click here to map it.

KNOW BEFORE YOU GO 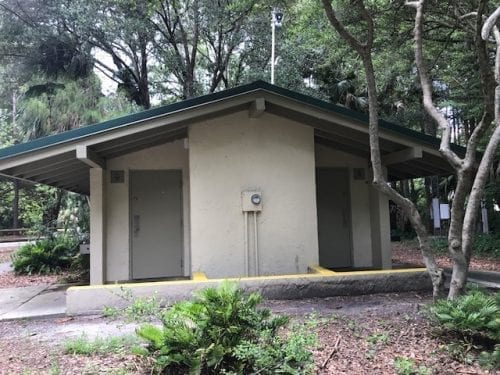 There are two bathrooms not too far from the playground – look for the small white buildings out past the picnic pavilions on either side of the playground. Photo above so you know what you’re looking for.

The famous explorer Hernando de Soto landed in Tampa Bay in 1539 in search of gold and began an ill- fated trip through Florida and the southeast US, including a stop in Lakeland, Florida at Lake Parker. That site is included on the state’s De Soto Trail. This new playground is designed around the history of Florida and the joy of discovery. From a replica of a 16th century ship to a tree house to a zip line, the new park promises an experience unlike any other in our community.

Why The Rotary Playground?

The four Rotary Clubs of Lakeland raised over $300,000 towards the construction of the playground at Lake Parker. Rotary Benefit Concerts were held in Lakeland in 2015, 2016 and 2017 to raise funds to donate to the City of Lakeland. Past concerts featured The Beach Boys, America, Three Dog Night, Jessie James Decker, Sister Hazel, and Wilson Phillips. The hard work and generosity of this international service organization is recognized with the Rotary name.

If you love playgrounds, check out our list of the Best Shaded Playgrounds in Lakeland.

What are you waiting for? Get out there and start exploring! About the Author: April Mucci

April is the owner of LakelandMom.com. She has lived in Lakeland since age 2 and is passionate about our community and connecting families with local resources. She is a mom to 2 boys and a mini goldendoodle, wife to Matt. You can often find April at the baseball field where she cheers on her baseball loving 11 year old, or home building Legos with her 9 year old. She loves reading, saltwater fishing, and working on Lakeland Mom!